One of the things I’ve been looking for as of late are games that I can play by myself. It’s not that I don’t have friends, but between an insane work schedule, and an even more insane winter…I just haven’t had the opportunities to see them as much as I’d like. During a rare break in the snow, I made a thrift store run and came across Scrabble Pronto.

1 or 2 Players! Perfect!! Solo play!!!  Now, I’ve seen dozens of Scrabble dice variations over the years (you’ll probably read more about them later). Most of them try to recreate the method of playing Scrabble, building intersecting words for points. However, I feel most of them fail because they neglect the area control aspect of Scrabble, which is my favorite part of the game.   Scrabble Pronto takes a completely different path, and is surprisingly successful.

I do want to start with my biggest “gripe” about the game. Please note, gripe is in quotes…this is tongue-in-cheek. But look at what comes in the box… 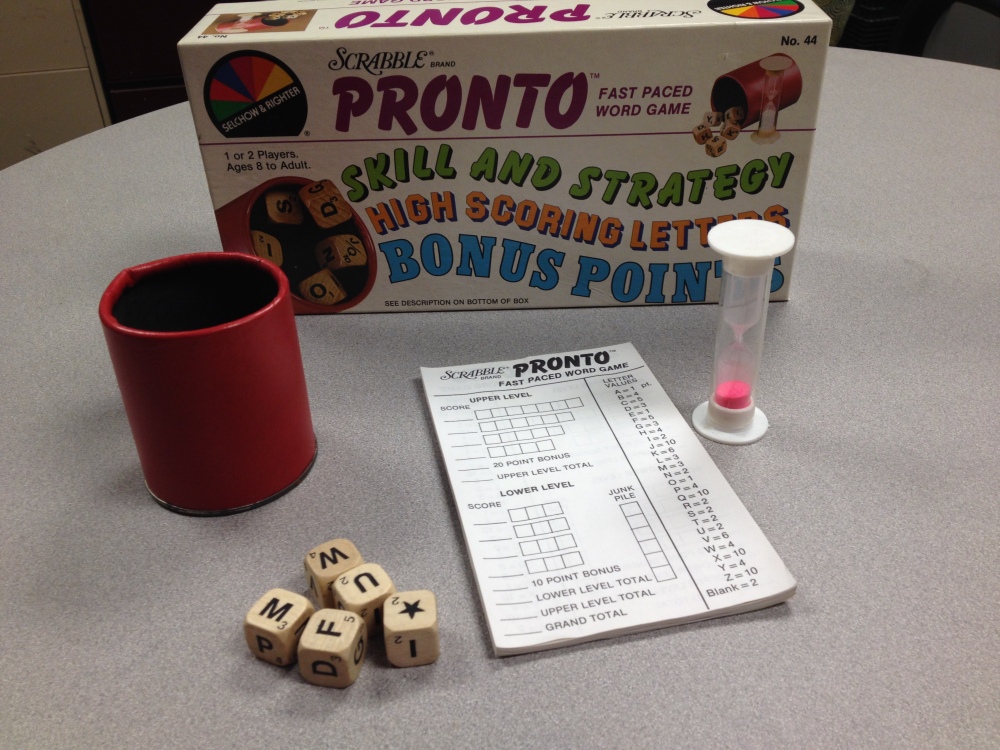 In all actuality, I give them extremely high points for the dice. They are incredibly well thought out. Two of the dice have the vowels. A,E,I, and O are all represented twice, U is on one die, as well as two Stars which represent wild cards. The other three dice found a way to stuff all the consonants on there. The four hardest to use consonants share sides (J/X on one die, Q/Z on the other) so that you can’t get too hosed by bad letters, and they offer you some choice as to what you want to use.

Game play of Scrabble Pronto is incredibly basic. One player (the box says 1 or 2 players, though in actuality an infinite number of people can play, given enough score sheets) rolls the five dice, and then flips the timer. Players now have one minute to place the five letters rolled onto their score sheet. That’s it. 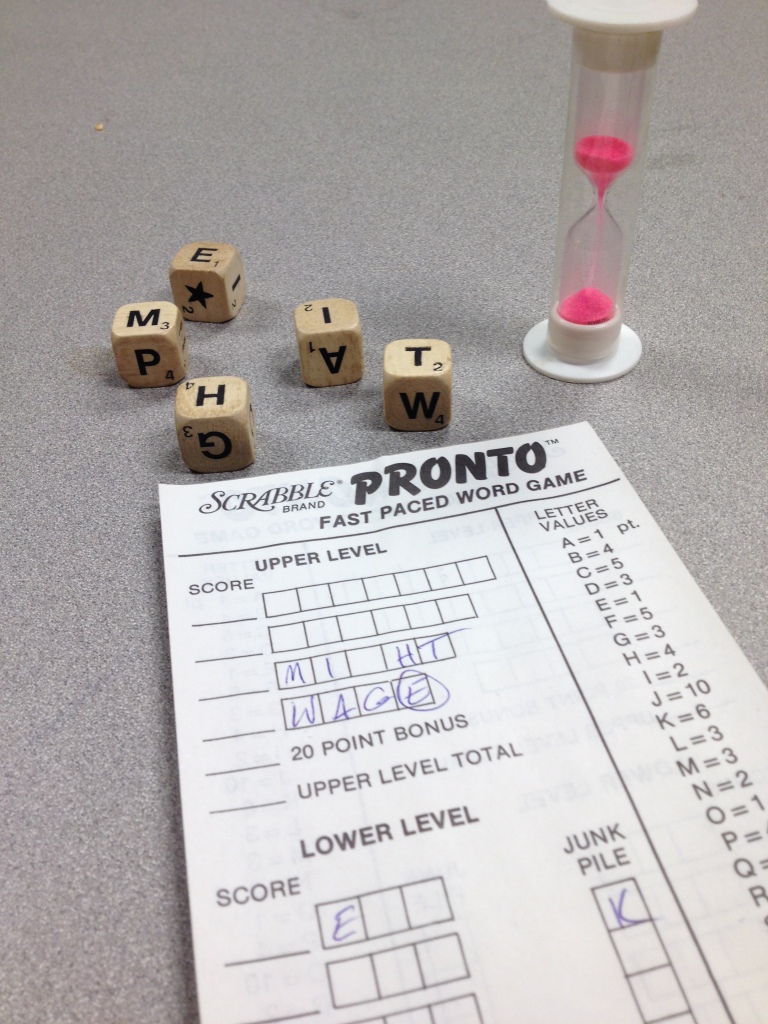 This game is really Scrabble, mixed (sort of) with the Any Number pricing game from The Price Is Right. You have to place every die rolled onto your score sheet, no replacements, no rerolls…nothing. The goal of the game is to, in 8 turns, successfully spell four 3-letter words, and one each of 4, 5, 6, and 7-letter words. Thankfully, they do give you a “Junk Pile” (aka The Piggy Bank) where you can play less desirable letters. Be careful about using it too much early in the game. Otherwise, you’ll be having to throw garbage letters into your other words, which kills your ability to score.

“Now Scott…” I hear you say, because I have your webcam and microphone tapped, “How can you spell a 7-letter word with only 5 dice??” That’s where the risk of the game comes in.  In my pictured example above… I used four of the litters to start (hopefully) spelling MIGHT, and put the E as the start of a three letter word. I could have just as easily used M,E,T,H in the 6-letter spot for METHOD, or used M, E, T in the 7-letter spot hoping to spell METERED or any number of other combinations. If you love the newspaper Jumbles, this game would be your thing. It’s also decent Scrabble practice, as the ability to see different word combinations quickly is a huge plus in Scrabble.

The game goes 8 rounds. Points are scored just like in Scrabble. If you successfully fill the words in the top section, you get a 20 point bonus. Get all the lower one, and you get 10 points. No points for letters in the Junk Pile.  High score wins. In my game above, I failed in getting VALLEYS or VOLLEYS, either one so I scored 0 for that word, but got something in every other spot for a respectable score of 86. My current high is 93. One of the score sheets left in the box showed a previous owner scored 113!! I have some work to do.

I greatly enjoyed this game, if you couldn’t tell. I like the fact that they did something different with the Scrabble concept than just try and make a another crossword dice variant. Scrabble Pronto plays very quickly, it plays solo, and can take more players without extending the time it takes to play…a giant bonus.

Unfortunately, Scrabble Pronto looks to be a little bit difficult to find. Since I just found it a couple weeks ago, I’ve not yet checked any of my other Scrabble Dice games to see if they have a similar die setup that could be used instead. If you ever come across it cheap, I recommend it quite a bit. A true surprise, and pleasure to play.

I have several ideas in mind for my next installment… a newer game which twists a classic card game, a baseball card game that was killed off – only to be resurrected by some loyal fans, or a look at what happens when you try and take popular Euro-style games – and turn them into dice games.  Please comment below, or wherever else I may see it to vote for your favorite idea.

As always, thanks for reading.